The Euro initially hit resistance in the 1.24 area against the dollar on Monday and dipped lower to test support below the 1.2350 area. There was evidence if firm buying support below this level which helped curb further losses.

There was a narrowing of yield spreads between peripheral bonds and German bunds which helped stabilise Euro sentiment to some extent and the improvement in German yield support also helped underpin the Euro against the US dollar.

There was a decline in the Sentix business index for the sixth successive month, although the drop was slightly less than expected at -30.3 from -29.6 previously. The ECB confirmed that it had again not bought any bonds in the latest reporting week.

There was a high degree of uncertainty over the political outlook following Italian warnings that the Euro-zone could face break-up risks. The German government appeared to give cautious approval to the ECB bond buying plans while there were no major comments from the German Bundesbank. Chancellor Merkel appears in favour of quick action for Spain and potentially Italy to move quickly to a sovereign bailout which would also be the trigger for the ECB bond-buying programme. There are, however, increasing tensions within Germany with important opposition within the coalition and tensions with Italy have increased. There will also be domestic Spanish opposition to any rescue deal and tensions are likely to remain high.

There was still expectations of central bank Euro reserve diversification which tended to stifle attempted moves higher. The Euro did push to a high near 1.2430 before a fresh retreat to the 1.24 area as there were no major US developments during the day. 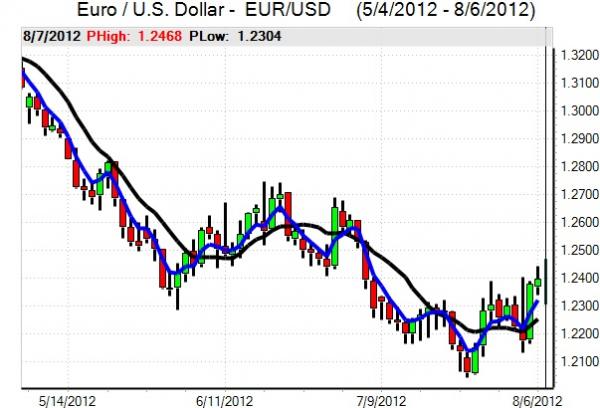 The dollar was unable to make any headway against the yen on Monday and dipped to test support in the 78.15 area with the Euro hitting resistance above 97.

There was a recovery in risk appetite as equity markets looked to gain ground and this did have some impact in stifling yen demand. Nevertheless, the currency proved broadly resilient during the session with a lack of underlying confidence in the dollar and Euro.

There were no major changes in Asian trading on Tuesday as the dollar nudged towards the 78.30 area as Asian equity markets pushed higher on expectations that there would be further action by China to boost growth.

Sterling was subjected to significant selling pressure in early European trading on Monday with a decline to the 1.5550 area while the UK currency was unable to regain ground against the Euro with a temporary dip to a 1-month low. There was evidence of reduced demand for the UK currency on safe-haven grounds as immediate Euro-zone fears subsided at least to some extent.

There was some Sterling-related demand at the New York fixing which provided support and there was a recovery back to the 1.56 region while Sterling was trapped close to 0.7950 against the Euro.

The dollar was unable to move above the 0.9730 level against the franc on Monday and dipped to test support below 0.9680 during the New York session as the Euro retreated back towards the 1.2010 area despite a brief spike higher. Although there was some evidence of reduced franc demand on defensive grounds, markets remained on high alert over inflows.

Seasonally-adjusted unemployment held at 2.9% according to the latest release. The latest reserves data will be watched closely on Tuesday and another strong increase for July would increase speculation that the National Bank could be forced to abandon the minimum Euro level. 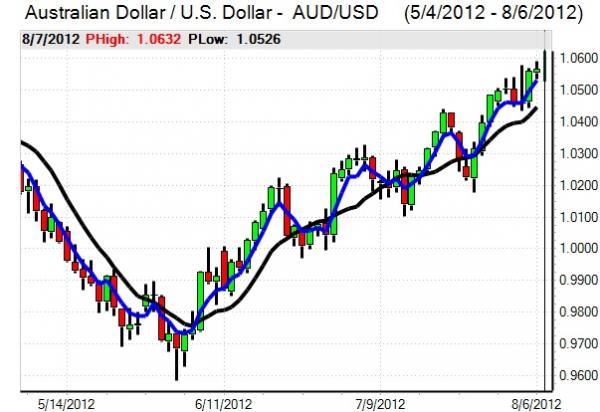 The Australian dollar maintained a strong tone during Monday and pushed to fresh six-month highs close to the 1.06 level against the US currency. The currency gained support from a general improvement in risk appetite as equity markets moved higher.

The AIG construction index weakened further to 32.6 in the July release from 34.8 previously, maintaining the run of extremely weak releases. The Reserve Bank of Australia held interest rates at 3.50% following the latest policy meeting with optimism surrounding household spending.