Unemployment Worse For Some

While unemployment has been rising across the US in the last several months, we saw here that female workers have been able to hold onto their jobs with much more proficiency than their male counterparts. One labour group that has performed markedly worse than both of these groups are teenager workers. Here’s a look at teenage unemployment compared to national unemployment: 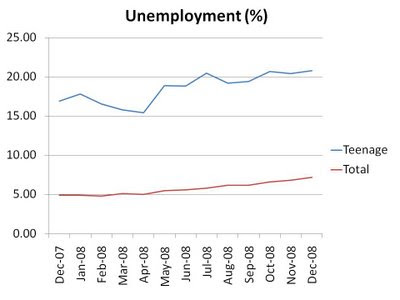 With their limited experience and skills, teenagers command much lower salaries than their adult counterparts. So shouldn’t companies be more willing to hire this group during recessions, as they shed their more expensive workers? Not so much, and the reason comes down to the artificial wage rate for teenage workers.

For adult workers, wages are mostly set by the market. That is, employers and employees agree to a rate based on their available alternatives, with little in the way of government intervention. However, for workers with little skill and experience, a category in which most teenagers fall, it’s minimum wage that sets the cost of labour. Since the cost of this labour is higher than what the market would set it at, demand for teenage workers is kept artificially low. (For a more detailed explanation of this phenomenon, see this article.)

So is the solution to this problem abolishing minimum wage? This will almost certainly increase the number of employed workers, but will also reduce wages for many. For a discussion on the effects of removing the minimum wage, see here.