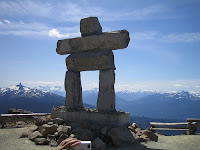 Vancouver is currently preparing for the 2010 Winter Olympics. As part of the Olympics Vancouver is constructing a residences for athletes. The city had planned to see the residence sold off as condos after the Olympics for a healthy profit. With the credit crunch and the downturn in housing in Vancouver though the story is changing. To boil it down, basically Fortress Investment Group was loaning the money to complete the work on the site and has now stepped back and stopped funding the project, leaving the city of Vancouver in the lurch.
Wherever there is money it is worthwhile to ask; is there a opportunity here for investors?

Lets examine this further. Why would Fortress back away from the current deal, is it a ploy to refinance a better deal with the city and therein create an interesting buy opportunity on its stock?

What possible reasons would Fortress back out:

The last year has been tough on Fortress, it has posted massive losses over the last two quarters and its stock price (which in this case can be thought of as a thermometer of investor sentiment) is under $2 after having traded as high as $30 a year ago, it has also faced several recent downgrades. It is highly unlikely that Fortress is finding it easy to come up with the millions of dollars in funding to finance the rest of the construction.

Is there a buy opportunity here, unlikely. I see the likely results of this being any of the following:

All in all I don’t see much of a future for Fortress in this situation, and therein no real buy opportunity.