Walgreen: Cheap By Its Own Standards

Walgreen (WAG) is a retail drugstore chain that operates primarily in the US. Its industry is considered relatively stable, as prescription medication costs are unlikely to rise or fall significantly depending on the economy (unlike certain surgical procedures, as we saw here). WAG has also been around for decades, and therefore offers us the chance to examine investor sentiment towards this company over time. Below is a depiction of WAG’s P/E since the early 1960s: 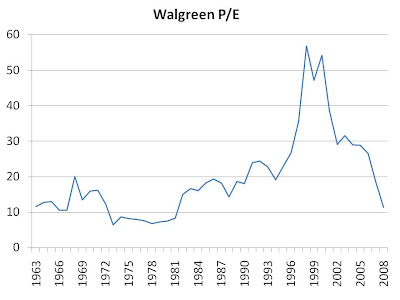 Clearly, Walgreen has seen many recessions come and go. But despite the stable nature of its industry, it has seen wild fluctuations in its P/E, especially in the last decade. (Incidentally, despite being in a completely different industry, Coke (KO) is also an old and stable company which therefore lends itself to the same kind of historical P/E analysis, which we looked at here.)

We can see from the above chart that WAG has not traded at such a low P/E for quite some time, which may offer long-term investors the opportunity to profit from a potential P/E expansion when positive investor sentiment returns. However, a company’s P/E value does not take into account its level of debt and is furthermore affected by one-time items which may distort a company’s “normal” earnings. As such, in future posts we’ll compare WAG to its competition (CVS, RAD) keeping such items in mind.