Although it’s just the minutes and not a policy decision, often the minutes of the Fed meeting move the market more than the decision itself. Sure a cynic may say that the reason for this is that the minutes are less meaningful and they are just an excuse for manipulators to create whatever market reaction suits their needs but we are no cynics here are we? On the last Fed Minutes Day (April 8th) the market opened up 1%, then fell 1% on a poor oil report at 10:30, then rose 1.5% by 1pm, then dropped 1.5% through the minutes until 3pm when it amazingly recovered and we finished the day up about .75%. Isn’t that exciting?!?

It sure was exciting for us as we had grabbed the DIA $78 puts at 1:10 as the market rallied for no particular reason and we caught the dead top of a 150-point drop for a huge win. We’ll be looking for opportunities like that today but we’re not going to force it – that opportunity came because the markets were up irrationally so it was easy to play. My quick notes (at 2:03)from the last Fed release were: “Credit not easing. Concern over assets they are buying under TALF. Serious downward GDP forecast to -1.3% for 2009 AND 2010 Continuing deflation risk. Economic activity fell sharply and should continue to contract. Uptick in housing starts was a glitch, not a trend. Energy and Ags now being affected by slowdown where they were not before.” As I concluded at the time “Not exactly rally fuel.” 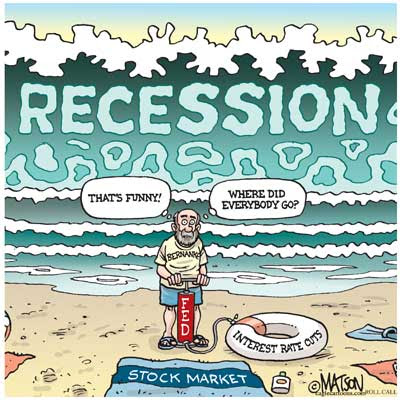 Nonetheless, the next day we jumped 250 points to 8,083 as “green shoots” were seen in the Fed’s language. That was April 9th and we spent the rest of the month struggling below the 8,100 mark but punched over at the end and here we are, up 10% from the last minutes and looking for even greener shoots to break us over our 40%lines. Whatgave us a boost on April 29th was the FOMC non-decision where the Fed said: “Information received since the Federal Open Market Committee met in March indicates that the economy has continued to contract, though the pace of contraction appears to be somewhat slower.” I know – don’t you just get goosebumps? Exciting as a statement like that may be to investors (and the markets gained 5% in the week after that release) we…
END_OF_DOCUMENT_TOKEN_TO_BE_REPLACED