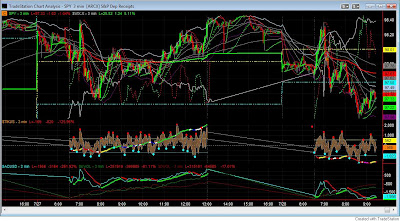 After a very noisy yet tradeable open on the weak sentiment numbers (and inspite of the housing price numbers), the major indices have pulled back about a full percentage point, putting in the first lower-low in the SPY in eleven days. Internals are net negative, but are currently running with a positive slope after a very large supportive volume spike near the lows as the Qs moved off S1. There is always the chance of the “dipsters” coming in later in the day, but for now I expect continued mild weakness below the VWAP.