A Recession by Any Other Name Would Still Be Bad!

Last week I was very anxious awaiting a handful of government reports that would report on the health of the economy.

No sooner had the GDP report been released showing the economy had experienced two consecutive quarters of negative economic growth and the  SPIN machine was in full force on mainstream media trying to redefine  a recession.

It’s incredible that everything has been so politicized.

Silly me.  I shouldn’t be surprised.  But I am.

In the early 1970s after President Richard Nixon closed the Gold window, the Nixon administration blamed all of the price increases on speculators!  Yes, you dear trader as a speculator were considered guilty for trying to protect the purchasing power of your deteriorating assets.

The inflation had nothing to do with the massive spending that the government undertook in the 1970’s paying for a war in Vietnam, social spending and NASA.

A few years later, in 1978 during the Carter administration,the country had just been propagandized by the Ford Administrations’ “WHIP INFLATION NOW” campaign.   Alfred E. Kahn — was a Cornell University economist in charge of President Jimmy Carter’s inflation-fighting efforts.  Mr. Kahn at a press conference stated that  a failure to get soaring prices under control could lead to a “deep, deep depression.”  President Carter’s aides were so infuriated at the possible political fallout, that Kahn was instructed to never to say that word, or “recession,” ever again while in Washington D.C.

Fast forward to 2022 as we approach the 2022 mid-terms it is understandable that a contracting economy would intimidate bureaucrats.

However, somebody apparently forgot to tell Google.

Meanwhile, Twitter was operating on the old-fashioned way of defining recession in thousands of discussions online.

Meanwhile, the Federal Reserve and the White House were in denial that the U.S. economy was in a recession.  And much of the media, like obedient scribes sitting on the right hand of the throne, began treating the word “recession” as though it were a philosophical or spiritual concept that was too difficult for the uninitiated to ever comprehend.

Here is a simple observation that you can verify the next time you do a Google search.  Have you ever noticed that the same people who told you that inflation wouldn’t occur, or that it would be transitory, are now the same people telling you that we are not in a recession?

Have you ever noticed that nobody was held accountable for the horrible policies that led up to the Great Financial Crisis?

Here is some bad-tasting medicine that everyone needs to confront:

News Flash: Producer prices are at all-time highs and have gone vertical.

EVERYONE is nervous about what quantitative tightening is going to look like.  Since the Great Financial Crisis 14 years ago we have had an economy that was being completely subsidized by government credit.

I began this article with two quotes from former Fed Chairman, Ben Bernanke.

1.“The Federal Reserve is not currently forecasting a recession.”

2. “The Federal Reserve will not monetize the debt.”

The purpose of these quotes is to hopefully allow you to recognize how political of an institution the Fed is.  They have all the money so we are taught not to fight them.  But as traders, we also need to recognize that oftentimes they resort to politically expedient solutions because doing otherwise would make people question their effectiveness.   On the chart, I have labeled when these statements were made.  The grey area on the chart is today recognized by the Fed as a recession. Since it is in the past it is forgotten by most as ancient history.

I don’t intend to beat up on Mr. Bernanke.  But sometimes the most empowering thing that a trader can recognize is that the emperor is not wearing any clothes.  Most people bend the knee to a monetary authority when all you have to do is read the Fed Minutes to recognize that they have less of a clue what to do next than you do.

Analysts and the media throw around the word “trillion” without any understanding. If I ask you to count for 1 million seconds, it will take you 11 days

If I ask you to count to 1 billion seconds, it will take you 11 years.

And yet today we throw around the word “trillion” as if it is the perfect solution for all economic ailments.

No one, including the Fed knows what the economy is going to look like later this year.  The Fed is hiking interest rates while going into a recession and trying to make pretend that something BIG is not going to break.

We have not seen financial tightening or an era without federal introduced spending in 14 years.  Have you ever noticed that the word “stimulus” is no longer being used to discuss anything in the economy any longer?

Furthermore, it is patently obvious that everyone is affected by higher food and energy costs, which means there is less spending that can be done on other items, unless wages increase.

As is normally the case some people are seeing moderate wage increases but not enough to keep up with a 9.1% inflation rate.  So as the Fed hikes rate they risk pushing the economy into a severe economic contraction.

Stop and think about what the term “recession” means to the stock market. Whether you like it, or not, weaker companies go bankrupt during an economic recession. A broken business at any price is still a broken business.

Nobel Prize-winning economist, Milton Friedman equated Federal Reserve policy with alcoholism. “When you start drinking or start printing too much money, the good effects come first, the bad effects only come later.” Bureaucrats will never admit to the connection.

As traders, during recessions we need to focus on:

All recessions are the economy’s attempt to correct the giant misallocation of resources that occurs during a phony economic boom.  When interest rates are artificially low businesses are seduced to over-leverage themselves and borrow heavily.  Then when interest rates rise the markets have to unwind all of these mistakes so that the economy can find equilibrium again.   As much as I hate to say it, the bigger the phony boom, the bigger the bust.  Since the Treasury increased the money supply by trillions of dollars in the last 30 months, it is very understandable why nobody wants to admit that a bust is even possible.  Our monetary authorities are like children on Halloween night whistling in the graveyard.

I have written about this previous articles which you can read here:

Inflation, The Fed, and Corporate Insiders – Are We Witnessing a Major Stock Market Top?

How Inflation and Fed Tapering Can Destroy Stock Market Valuations

As traders we are required to allocate our capital correctly even in this type of propagandized economic landscape.  The challenge is huge if you don’t have a method to make sense of the madness.

I have shared with you my opinion of this economic story.  But the ongoing challenge for all traders is to find a way to avoid dangerous market environments, and more importantly stay on the right side of the right trend at the right time.  Whether or not the economy is in a recession is completely inconsequential.  What is important is that you successfully navigate the economic landscape and avoid the loss of purchasing power that these situations foster.

Quick question.  How has your portfolio done over the past 6 months?  Past year?

What is your performance going to look like at this time next year?

I can assure you that at this time next year the mainstream media will be offering some other controversial nonsense to avoid responsibility and accountability.  It is a luxury that we as traders cannot afford.

Our only loyalty is to the trend.

The sign of a great trader is not how much they make when they are right, but rather how little they lose when they are wrong.  This is why I would invite you to explore using artificial intelligence in your trading.

Artificial intelligence is so powerful because it learns what doesn’t work, remembers it, and then focuses on other paths to find a solution. This is the Feedback Loop that is responsible for building the fortunes of every successful trader I know.

That should get you excited because it is a game-changer.

It sounds very elementary and obvious. But overlooking the obvious things often hurts a traders’ portfolio.

The basics are regularly overlooked by inexperienced traders.

The beauty of neural networks, artificial intelligence, and machine learning is that it is fundamentally focused on pattern recognition to determine the best move forward. When these technologies flash a change in forecast it is newsworthy. We often do not understand why something is occurring but that does not mean that we cannot take advantage of it.

A.I., through advanced pattern recognition, analyzing hundreds of thousands of data points, and crunching millions of computations, finds the highest probability trades and is indispensable in separating fact from fiction.

Artificial intelligence has decimated humans at Poker, Jeopardy, Go! and Chess.  Why should trading be any different?

Visit with us and check out the A.I. at our Next Live Training. 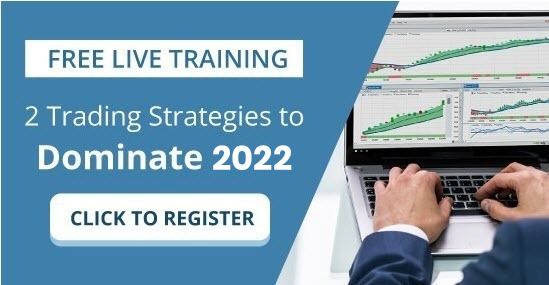