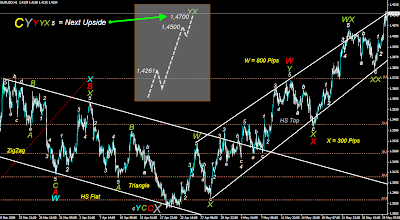 For a while took a peek for this chart also how does it look now after a week progress again.

I have to confess even my bullish target might be far too low in here and that´s not low either.Something sense finally starts to approve in here between the waves meaning answers for my questions why an earth there´s so much upside zigzag waves (trees) instead impulses on this channel when we subdive inside of 5 and 15 minutes charts in the past pips history.

We might be dealing triple zigzag in here and I actually believe now we do.

There´s some interesting calculation in here, in fact with 1,4250 wave Y would come with this scenario similiar size with W – meaning 800 pips each since 1.2900 bottom. (Of cource only with the case if this would be normal ABC correction this would be possible, with WXY pattern Y wave must come higher.)

However, this seems to still fit calculation which I did with the post below for my old scenario and based for the fact there´s much larger WX wave combination allready behind since 1,2500 – we will drop something below of that 1,4300 and that´s likely big W2 corrective to the channel bottom (really, it´s big pips correction also as channel is reasonable wide).

If I multiply this first Y wave from triple zigzag with 1.618 I will end triple zigzag YX wave to reach 1,4700 target and that´s not far away 3 years chart 61.8% retracement, in fact it´s allmost there. While many commodites still looks alike screaming buy in here (copper, oil, gold) should confirm.

May I suggest that there´s still huge run ahead and specially now with commodites, fast and furious summer rally. With pasted monday chart I posted as a long setup for SPX bottom with 878, it was likely bottom for multiweeks correction. I can see inverse HS now there also and also bullish triangle.

With Eur-Usd and Eur-Chf charts we would overlap bearish triangle with this triple zigzag YX wave in here before turn occures – but just slightly, you can hardly see one hundres pips movements from daily chart. Perhaps that SPX might come more lazy behaviour with this one, but commodites should come now a bit wild.

However, there´s no any reason to skip pasted calculations (ie. from previous post), it also fits perfectly in here – just different waves would behave with them. Firstly, we found allready that my 1.4161 top on friday to drop at least one small corrective down and I think it was pretty well calculated as it was allmost month old work.

Also the post below I counted for this weekend fits in here that one fully impulse ends with that 1,4261-1,4272 area. With triple zigzag case it should be impulse wave 1 of triple zigzag YX wave. Friday size was perfect with 161,8% target line at 1.4150, meaning it was impulse wave 3 of impulse wave 1 YX wave. Small fifth followed by US afternoon before it dropped down.

To be honest this absolutely massive multimonths size daily triangle below is far too easy in here to end E wave and this is massive sideways continuation pattern we´re dealing with. We should have screaming selling macd setup if C wave down would be knock the door allready. Eur-Chf at the triangle bottom in 240 min chart after 60 min chart head&shoulder pattern retraced 61.8% should confirm that story.

Hopefully you did understand this scenario & calculation, because I think I just found exact location where we are and this should give for me some asvanced tools for work with these waves also with my much more smaller timeframes EW charts.

Well, did anything change ? In much larger spectrum not much, just a bit more upside travelling before plunge coming, but in FX world every pips is serious ££ and $$.

Did it sound as complete mess ? So, I´ll repeat the current location Eur-Usd.

I did projected it to the chart above.