From The Mailbag: Canadian Tire

Canadian Tire (CTC.A) is a retailer and distributor of a wide range of products, from automotive parts to sportswear. Its stock price has fallen by over 50% in the last year, from $83 to $39. This gives it a P/E of 8 and a price to book value below 1. This is despite the fact that the company’s profits appear to hold up relatively well even during downturns. Here’s a look at operating margins over the last recession and through the first three quarters of this year: 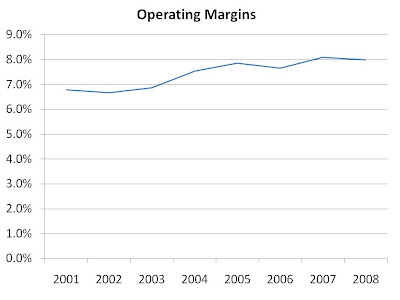 Clearly, this company is not a cyclical one and therefore it can afford to take on a reasonable amount of debt without running the risk of insolvency.

But the company’s P/E suggests the company is on the decline; but this is hardly the case. The company has embarked on a five-year plan to add more locations while improving profitability at existing locations. The company’s full strategy is described in its annual information form available here.

But how can one determine whether management is credible and/or effective? Can they really deliver on their “bigger and better” strategy? One method on which to judge management is on its effectiveness at generating returns on the capital it has at its disposal: 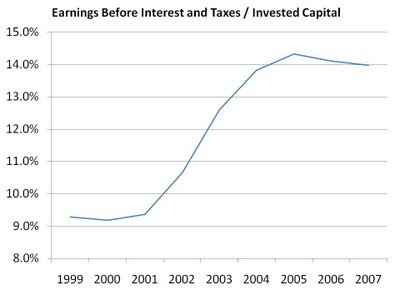 In the early 2000s, management decided to convert many of its medium and small sized stores to large ones. Their plan has appeared to be beneficial to company stakeholders, as returns have improved over the last several years.

Remember, however, that this company is well-known and has national coverage across most of Canada. As such it is a well-followed stock and may not reach valuation levels that give it a discount to intrinsic value that can be found in some of the smaller companies we’ve discussed.