Just eight months ago, with oil prices on their way up, Goldman Sachs boldly predicted an oil price of up to $200 per barrel. This raising of Goldman’s target price for oil followed similar periodic target price raises as the price of oil had been climbing for years. A few days ago, in a sharp turnaround, a new Goldman report predicted the oil price would drop to $30 a barrel by next year. 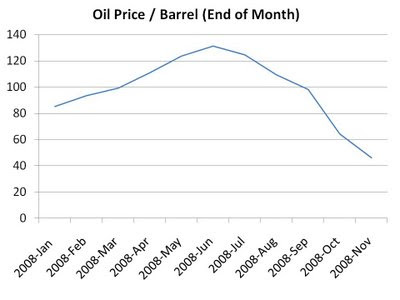 Goldman Sachs is supposed to employ some of the most brilliant minds in the world. Yet their predictions give the appearance of a firm simply extrapolating the market’s momentum. Is all this time, effort and money spent on short-term price predictions worthwhile? When we met with Warren Buffett a few months ago, he made it pretty clear that he doesn’t think anyone can predict the short-term price of anything.

Many have raised the possibility that Goldman makes such periodic price predictions in order to manipulate markets so they can profit from trades. Whatever the case may be, relying on analyst predictions does not appear to be a fruitful method of generating profits.

In related posts on “analyst predictions gone bad”, last month we looked at what analysts were saying about both Lehman Brothers, Fannie and Freddie, and Washington Mutual right before each of them went down.