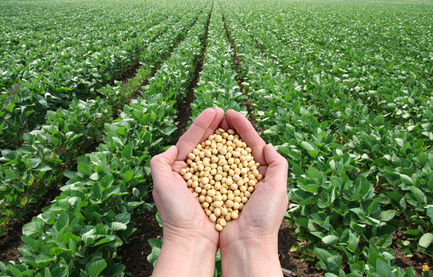 Focus for soybeans starts to turn to new crop year production in South America.  Crops growing in Brazil and Argentina are as big in influence as they are in the U.S.  The three largest producer exporters are the U.S., Brazil, and Argentina.  It is the only place to get beans from worldwide.  While we are finishing up counting the bushels of our old U.S. crop all eyes are on South America’s new crop. El Nino, the weather pattern, is affecting crops worldwide.  Its effect in South America is that it is bringing too much rain to areas of South America where planting is under way.  El Nino is a long term weather pattern that will not be going away anytime soon.  We eventually expect to hear of lower production in the year prior.  Big crops never come out of El Nino, small crops do.  Therefore, countries in need of high protein soybeans are coming in and buying with two hands. Last Thursday’s weekly export sales report showed 1.24 million metric tons of beans were sold last week for future shipment in the 2015-16 marketing year which goes from September 1st until August 31st.  The last two weeks we saw 2.506 million metric tons and 1.346 respectively.  Looking at the 2016/17 marketing year which begins September 1st next year, China was in for 1 million metric tons. This is a clear hedge against poor weather due to El Nino in South America which looks to continue.  Non- commercial funds came in short 14,000 contracts, that is 27,000 less than the week prior.  Commercial end users came in long 14,000 contracts, from being short 27,000 contracts essentially flipping their position from short too long in the market.  Index funds are long 135,000 contracts and can easily go to 185,000 contracts.

With this in mind I propose the following trade. I would look at buying the March 2016 1020 call and selling the March 1120 call for 6 cents or in cash value. The vertical call spread here offers long term exposure in the bean complex for in my opinion reduced cost. The risks are the cost of the trade which in this case is $300.00 plus all commissions and fees. IF the underlying futures price settles above the 11.00 level at option expiration, both calls would expire against each other, where one would collect 5000.00 minus all commissions and fees.

For those interested in grains, Walsh Trading’s Senior Grain analyst Tim Hannagan hosts a free grain webinar each Thursday at 3:00 pm central time. Tim has been ranked the #1 grain analyst in the United States per Reuters and Bloomberg for his most accurate price predictions for soybeans and corn in the years 2011 and 2012. Link for next week’s webinar is below. If you cannot attend live, a recording will be sent to your email upon signup. Or please contact me at anytime at slusk@walshtrading.com

RISK DISCLOSURE: THERE IS A SUBSTANTIAL RISK OF LOSS IN FUTURES AND OPTIONS TRADING.  THIS REPORT IS A SOLICITATION FOR ENTERING A DERIVATIVES TRANSACTION AND ALL TRANSACTIONS INCLUDE A SUBSTANTIAL RISK OF LOSS. THE USE OF A STOP-LOSS ORDER MAY NOT NECESSARILY LIMIT YOUR LOSS TO THE INTENDED AMOUNT.  WHILE CURRENT EVENTS, MARKET ANNOUNCEMENTS AND SEASONAL FACTORS ARE TYPICALLY BUILT INTO FUTURES PRICES, A MOVEMENT IN THE CASH MARKET WOULD NOT NECESSARILY MOVE IN TANDEM WITH THE RELATED FUTURES AND OPTIONS CONTRACTS.