My project yesterday – I ended working on it from 6am to 9pm. Yikes! Not much time for looking at the crazy market action on Friday.

I did, at the open, in Complacent Panda’s stock contest, sell my losing long shares of ESLR and F, and decided to short FAZ at $79 and long FAS at $4.50. These are bets on the market being oversold and due for a bear rally/short squeeze. These are trades I would not make in real life; heck, I wouldn’t even do them in my paper trading practice account. But they’re fun for the contest. I’m “banking” that we won’t get nationalization and there will be more details coming out about less invasive ways the feds will prop up the financial sector.

FIGHT THE PROPOSED TRADER TAX: Don Miller has several posts on the subject of the proposed house bill that would place a .25% tax on all gross trading transactions of equities, options, and futures. Here’s an online petition and a way to email your public officials in Washington. Seems like a media stunt by a congressmen to curry favor in the home district by demonizing Wall Street.

Here’s a chart of the biotech runner MELA. I traded it last Friday when it gapped up. I’m posting it to remind myself that these are good plays both ways on the way up and down. This one sank sooner than typical biotech set-ups that have both news and volume, likely I assume due to the overall market weakness.

Anyway, on the days these stocks break out, they usually are up big during pre-market and then gap up. If there is good news and/or volume increase, it’s almost always a good play to buy on the first dip in the morning, which I assume is typically profit taking for the long-term stock owners cashing in on such a jump in price. Usually the stock will eventually go back up as least to test or surpass the pre-market highs. A pretty consistent set-up but there are exceptions. 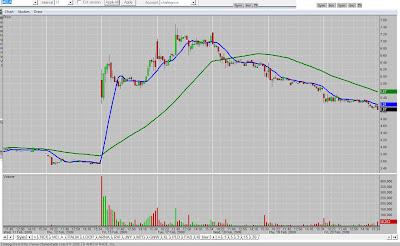