Few would dispute the fact that the housing market is undergoing an unprecedented downturn. But stocks in this industry may have been punished far more than is warranted. Investors with a long-term outlook can seek to profit by buying such beaten down stocks, and holding them until the market’s current bout of pessimism erodes. Consider The Home Depot (HD). Below is a graph depicting it’s P/E over the last few decades: 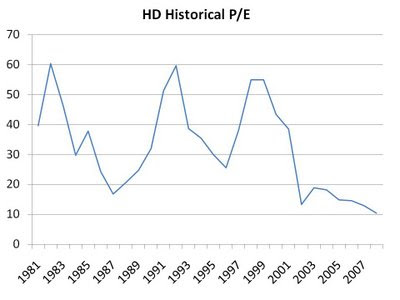 Due in large part to the macroeconomic environment, the stock is trading at historic lows compared to its earnings. But we can see from the chart that sentiment does vary dramatically when it comes to this stock. The changes in market sentiment that lead to the peaks and troughs of HD’s P/E are quite dramatic!

However, one cannot make a purchase based only on this analysis. It’s important to consider debt characteristics and the future viability of this business. HD has grown to be quite a bit larger than it was when its P/E was hitting 60, and so growth prospects may not generate the same kind of returns as they have in the past. Furthermore, Lowe’s (LOW) has taken steps in recent years to become a strong competitor. (We’ve compared these two companies across several metrics here.)

Nevertheless, despite the downturn, HD is quite profitable, and not in any danger of defaulting on its loan obligations (as discussed here). As such, HD may prove to be a value purchase for investors with long-term horizons.