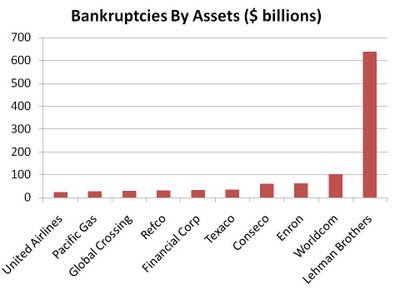 But financial companies use leverage to increase assets and thereby increase returns. As such, the number of employees actually working at these companies is not necessarily proportionate with the number of assets. Here’s a look at the same bankrupt companies as above but listed by employees instead of by assets: 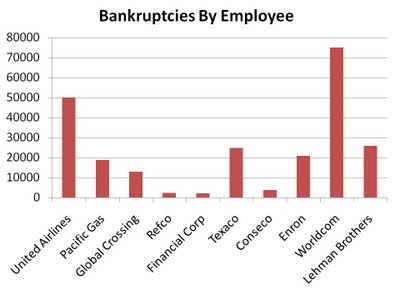 Interestingly enough, when it comes to employees, the Lehman Brothers bankruptcy is not the runaway bankruptcy by historical standards that it appears to be if only judged by assets. The largest bankruptcy by employee is actually K-Mart at 250,000, but it doesn’t even make the top 10 list by assets so it doesn’t show up in the chart above. The most recent large bankruptcy is that of Circuit City, at around 35,000 employees; this represents more employees than Lehman Brothers, but Circuit City will go down with far less fanfare.

So which measure is the one on which bankruptcies should be judged? The answer is both. When companies with large numbers of employees go down, it has a large direct effect on employment. When companies with large amounts of assets are wiped out, it results in large amounts of capital being wiped out, which affects the workers of stakeholders indirectly.