Lately, you could trade extremely part-time between 9:30 and 11:30 and really catch a lot of big swings. This morning a meeting popped up so I knocked out some other work in the morning to give me the afternoon to trade. It left me stress-free, but I peeked at the charts in the morning and knew I was missing out on some nice action.

Nothing too exciting in the PM. Shorted AAI on a $4.50 and 10/60 SMA cross after a two-day big run up, but it basically traded sideways and I only got a $40 gain. Shorted SONS on a quick pop, and it didn’t break down like I anticipated; these are only worth it when the rocket candle is like .20 or more cents and when the market it overall red. It still stalled after the pop but not worth the trade. Last, shorted C after it broke $4, but I manually exited for a $70 loss. I didn’t follow my exit rules (full color bar above 10 SMA on 5 minute and a 10/60 SMA cross on 1-minute) , so I took a greater loss if I had waited it out and followed my guidelines. Total $56 loss on the day with commissions factored in.

I’m posting this chart to remind myself to enter set-ups like this. DDR hit HOD over $4.50, and as a former runner when the market was on an up day, it has a good chance of staying above the 10 SMA on the five minute chart on a ride up. 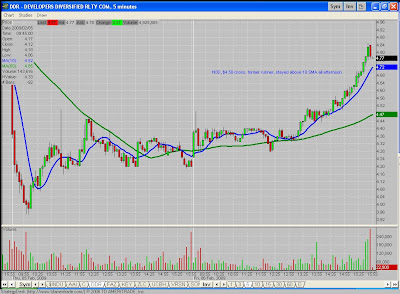 I finally made some additional trades in Complacent Panda’s contest. I went long on F (because it’s near its lows and support – looking to hold for a couple weeks) and ESLR (gapped down on bad earnings, but I think it will rise back up, maybe on stimulus and other federal news). Then I took some bets on the financial sector on short plays – overnight holds of FAZ and KEY (which was at near-term resistance). Also made the same short entry on AAI. Obviously, to me, this is even more play money than my TOS Paper Money account that I’m using for my momo day trading practice. I don’t have any stops in place on these and will ride them out unless disaster strikes. Here is where things look like now: