No Senate Bailout for Auto Industry (with new money)

Ok, at risk of tainting my own poll a friend asked me my thoughts on this question today so here we go….

For the bailout plan to pass it must go though the senate first. Here are a few facts:

Given premise 1 the senate will vote along party lines. Given premise 3 the vote will not pass unless the Democrats can get a few Republicans with premise 2.

So how do you appeal to premise 2? simple, if you don’t vote for this bill a factory will close in your state which will cause people to loose their job and subsequently they don’t vote for you. Which Republican senators are vulnerable then?

I made up a couple quick maps that highlight states that have plants in them from Ford & from GM. 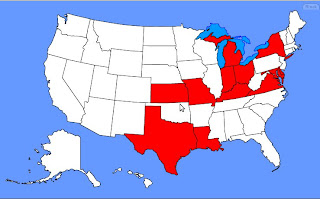 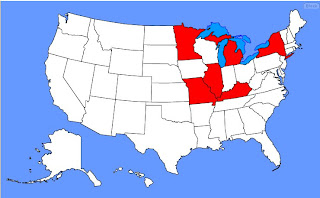 So given the collective list of Senators that represent these states what Republicans are up for grabs and how do they feel about the auto bailout? Surprisingly few.

Senate Seats (Blue= Democrat, Red = Republican, Purple = one of each)

Coleman, Norm (REP Minnesota) Has come out saying he will support the plan- in some capacity.

Bond, Kit(REP Mis) Has come out saying he will support the plan- in some capacity.

Cornyn, John (REP Tex) Will not support the plan.

Warner, John (REP Virginia)Retiring soon and has said little but expected to vote against it.

So based off of this there are two votes up for grabs, assuming the independents split, that passes the vote by 1 vote. But the two Senators mentioned said they will vote for it “in some capacity” in political talk that translates to: “We realize we hold all of the power and are going to make you give our states some other nice stuff if you want us to vote for this”.

So my call on the whole situation? Run don’t walk away from GM and unless you think Ford can hold up until the new Senate sits in January with a more heavily weighted Democrat side speed walk away from Ford also.

Anyway- that is my humble opinion love to hear yours!

****UPDATE: ****
There has been some recent speculation that the senate will approve the reallocation of the $25B that was given to the auto industry earlier this year (money that was suppose to be used on increasing the fuel efficiency of its vehicles) and let them spend it on financing instead. I stand by my conclusion that there will be no new money and with auto makers selling of parts of their businesses in a fire sale to raise capital I would still steer clear of the whole situation, but lets just wait and see!