The Role of Consumer Confidence

Every month, the Consumer Confidence Board and other agencies poll consumers to gauge their future buying decisions. As seen from the chart below, consumer confidence is at levels not seen since the early 1990s (source: Briefing.com): 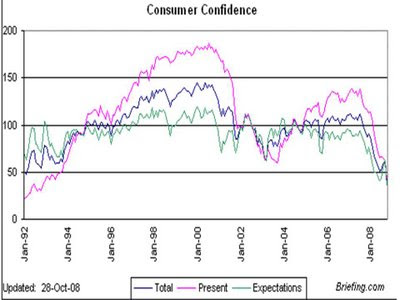 The only good news right now in the chart above is that by definition the confidence level cannot go below zero. But is consumer confidence even important? Maybe people say one thing about their purchase intentions, but change their minds soon after and end up doing another? After all, unlike unemployment statistics or GDP numbers, no money is changing or has changed hands at the time of measurement.

However, we do see strong correlations between consumer confidence and purchases. For example, last week we discussed LCA-Vision (LCAV) as a possible investment. We saw that its stock price had been crushed, but that it had negative debt and could therefore outlast the downturn. But we wondered if it had a secular problem as historical demand in its industry was as follows: 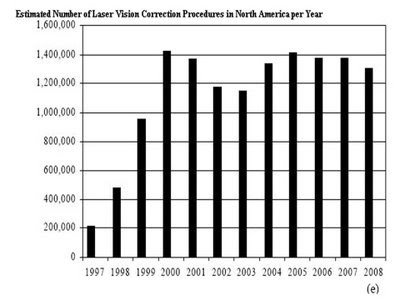 After all, 2001 numbers are higher than those from each of 2005 – 2007. From a different perspective, however, this may not be a secular issue, but rather a strong correlation between demand for this product and consumer confidence. If you compare this chart with the one above, there appears to be a strong correlation.

Consumer confidence levels can sometimes be useful in gauging whether demand for a company’s products is down for reasons it can’t control. Finding those with low debt that can outlast the low confidence levels offer the opportunity for great returns off of current stock prices.