The Euro pushed higher during the European session on Monday as it challenged technical resistance levels and the US currency remained under general pressure. The Euro pushed to a high above 1.2350 on position adjustment and residual expectations that the ECB would provide support for the peripheral bond markets.

There were a series of mixed reports from ECB officials both over the weekend and on Monday as German Chancellor Merkel returned from holiday. Council member Coene stated that strict conditions would be needed before ECB bond buying could resume and there was further uncertainty surrounding plans given the diversity of opinions within the council.

There were reports that there could be a further delay to the German Constitutional Court ruling on the ESM. A new lawsuit had been filed which demanded that a ruling needed to be delayed until another lawsuit had been ruled on in the European Court of Justice. Markets remained tenses as any further delays in the court ruling could seriously undermine sentiment.

There was a slightly improved reading in the latest Greek GDP report with an annual 6.2% decline for the second quarter which provided some slight relief to sentiment, although there were still major uncertainties surrounding the Greek outlook.

There were no significant US economic developments during the day and there was some speculation that there could be co-ordinated action to underpin the global economy during September.

The Euro was unable to hold its best levels and retreated back to below 1.2350 later in the US session with margin increases on Italian bonds having a negative impact on sentiment. The Euro held steady in Asian trading on Tuesday as French GDP was unchanged for the second quarter. 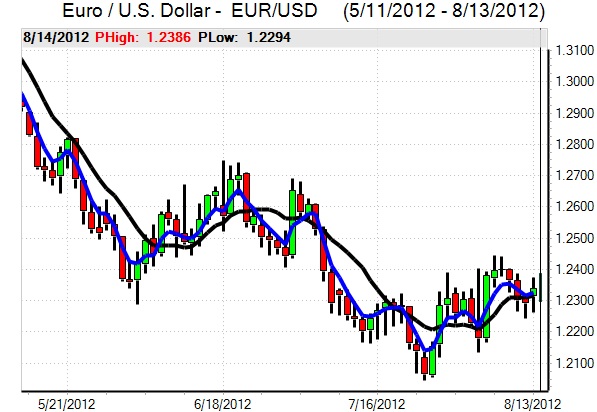 The dollar found support on dips towards the 78.20 level against the yen on Monday and pushed back towards the 78.40 area as narrow ranges prevailed while the Euro hit resistance close to 97.

The dollar nudged higher in Asian trading on Tuesday as there were gains in regional equity markets while the Bank of Japan minutes reported that any policy options should not be dismissed in combating economic risks.

Sterling maintained a robust tone in European trading on Monday and pushed to a peak above the 1.57 level for the first time in two weeks. Sterling was unable to make any headway against the Euro and also retreated alter in the New York session.

There was further caution surrounding the UK outlook and there were tensions ahead of the UK releases this week. A low consumer inflation reading on Tuesday would maintain expectations that the Bank of England would push towards additional monetary easing within the next few months.

There was also caution ahead of the MPC minutes as two former members called for a much more aggressive stance on quantitative easing. The latest RICS data recorded a decline to -24% for July from -22% previously which was an 18-month low for the index and maintained unease surrounding both the housing sector and wider economy. Sterling was still able to hold near the 1.57 level against the US currency.

The dollar dipped weaker during the European session on Monday with lows just above the 0.97 level against the franc before finding support. The Euro was again unable to make any headway against the Swiss currency.

The Swiss Labour Ministry stated that the Euro minimum level could be in place for years and these comments may discourage further aggressive franc buying in the very short term. Stresses, however, will flare rapidly if there is any renewed escalation in Euro-zone tensions and a surge in capital flight. 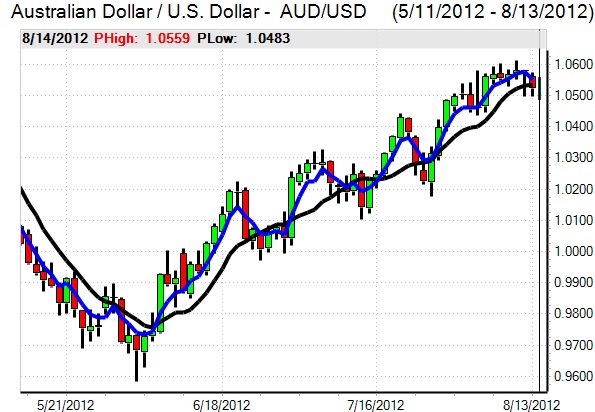 A rise in the NAB business confidence reading did not have a major impact and the currency found it difficult o move away from the 1.05 area in Asian trading on Tuesday.