The TED spread measures the difference between the interest rates at which banks are willing to lend to each other and US treasury yields. A wide difference between these yields indicates that banks are risk averse, as they require much higher returns than those offered on US government debt, which is considered virtually risk free. A small difference in these yields indicates banks are willing to take risks, asking for little yield in return for investing in assets with risks attached to them.
Here’s a look at the TED spread over the last several years: 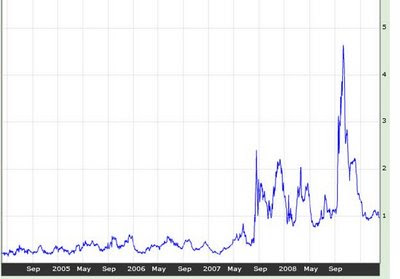 Clearly, one can see the stark contrast in risk tolerances for banks between the boom years of 2005-2007 and the more recent recessionary times. When economists and government officials sounded alarms of a “credit crunch” in 2008, we can get a good idea of why they might have thought so. Spreads spiked to alarming levels, pushing up financing costs for businesses and consumers alike.
Currently, the spread sits at 100 basis points (1 percentage point), which is certainly better than it was for much of 2008, but certainly not near the pre-recession years of 2005 to mid-2007. Governments around the globe are battling to implement measures to restore the confidence required to reduce spreads so that credit flows again. In the meantime, the market’s aversion to risk is likely offering value investors great opportunities to buy securities at discounts to their underlying values.
Data Source: Bloomberg