The 3 Most Important Macro Factors In The Market Right Now 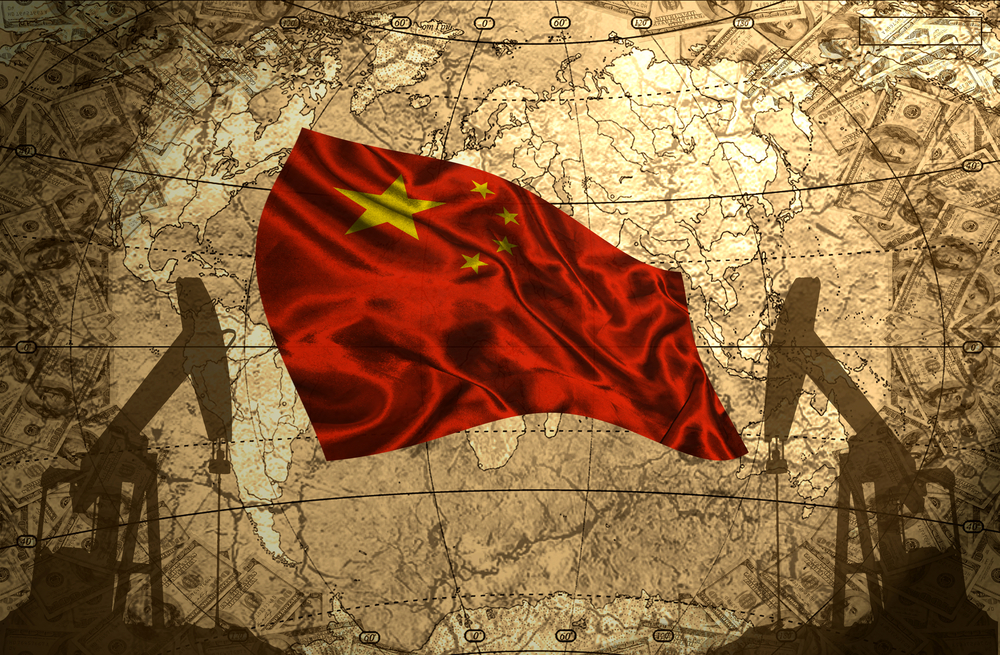 China. Dollar. Oil. This is the current macro trifecta. The most interesting and important variables in macro land. Properly discern what these three will do and you can figure out what every major asset class around the world will be doing for the next two years.

Let’s start then with the Red Dragon.

Our team at Macro Ops has talked about China a lot lately and we’ll continue to talk about them, because they are so important right now. They are the world’s last hope for stoking temporary demand growth. And they are trying desperately to accomplish this.

The chart below shows the extreme measures they’re taking to prop everything up. In just the last year alone, the CCP (Chinese Communist Party) has managed to boost debt spending by an amount that equates to over 40% of GDP. That’s more than the credit they created in the year following the Great Financial Crisis 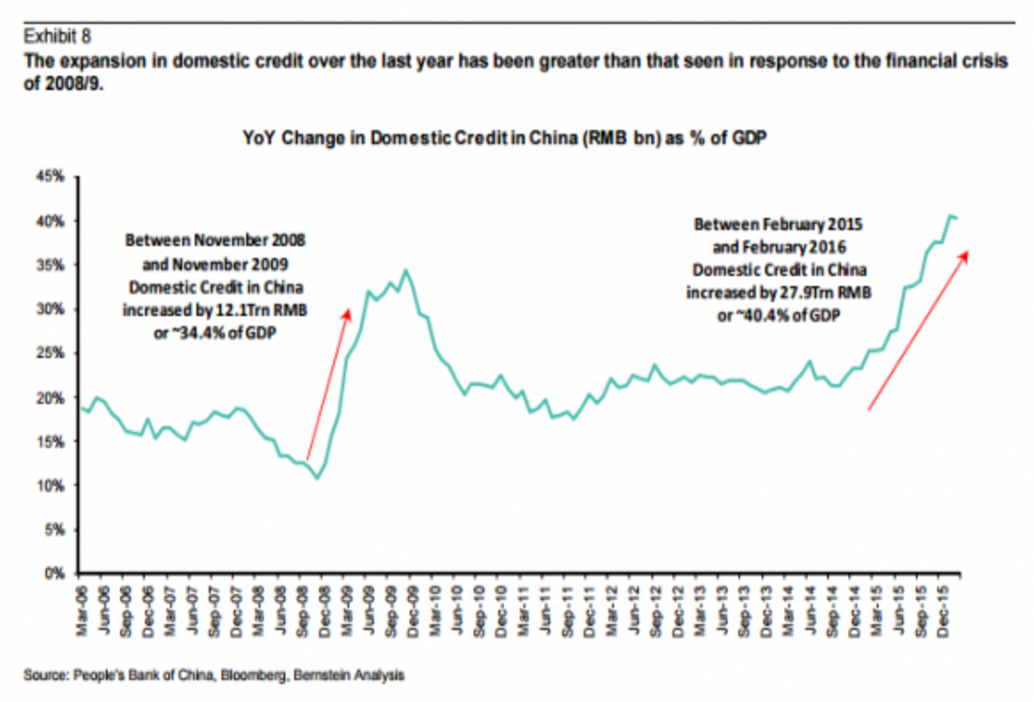 This has caused the big ball of credit to roll around China again; inflating assets as it careens around without any sense of risk or value. The latest object of this credit ball’s desire seems to be the Chinese futures market where volumes have skyrocketed. 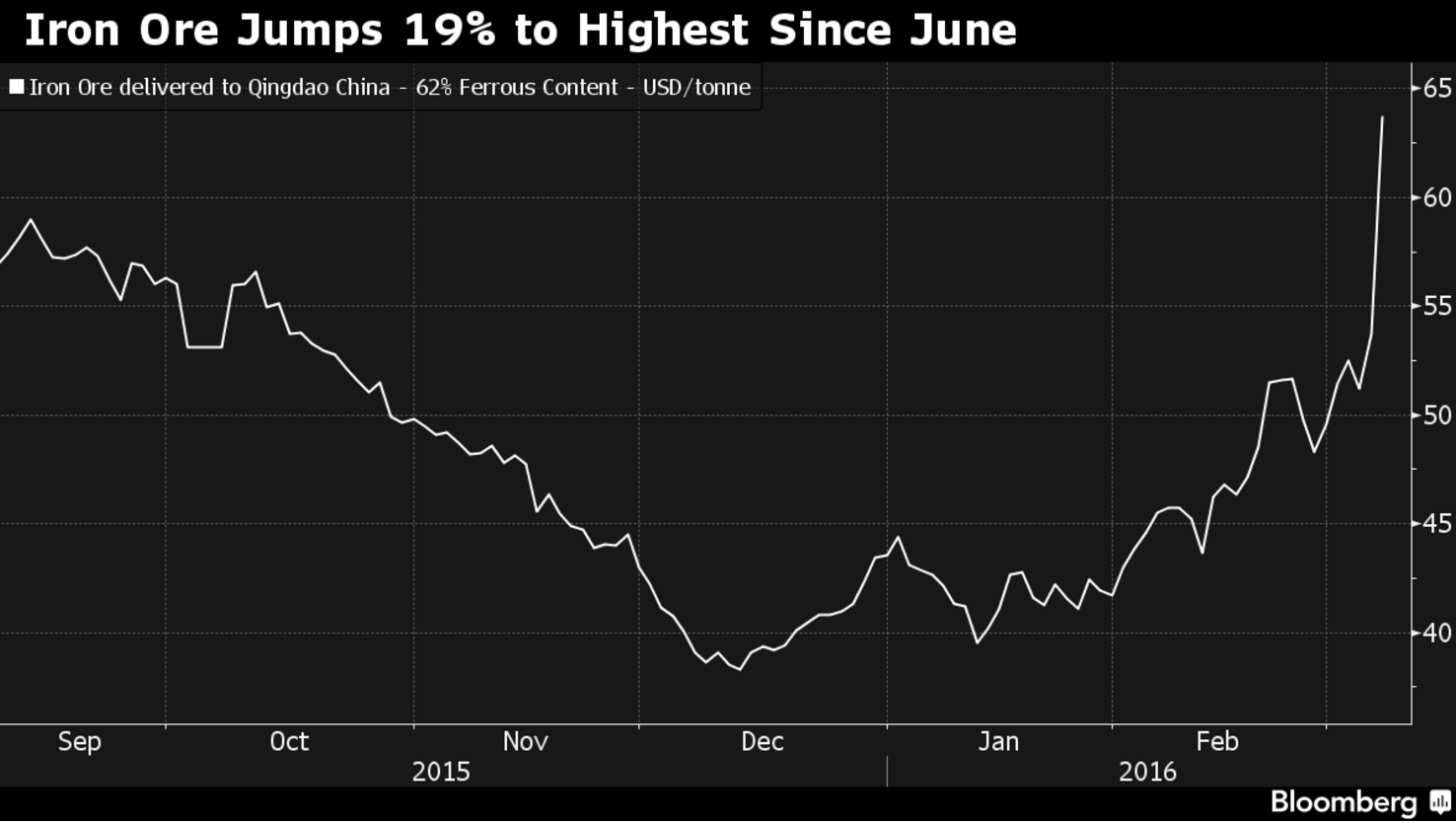 Why is China throwing everything plus the kitchen sink at slowing growth? Simply put, fear. The CCP is a fragile regime (as all unelected governments are) because their continued support from the people relies solely on the CCP’s ability to convince the people that keeping them in power is in their best interest. The have done this through economic growth. Now that growth is slowing, this social stability pact is quickly becoming at risk of unravelling.

Look at the chart below. There is no doubt these strikes have the Chinese government worried. This is why the CCP is stepping up its “1984” game, in an effort to become even more Orwellian. They’ve recently started a new initiative to teach young school children how to spot a foreign spy — playing a game called “catch the spy” — and what they should do to report them. 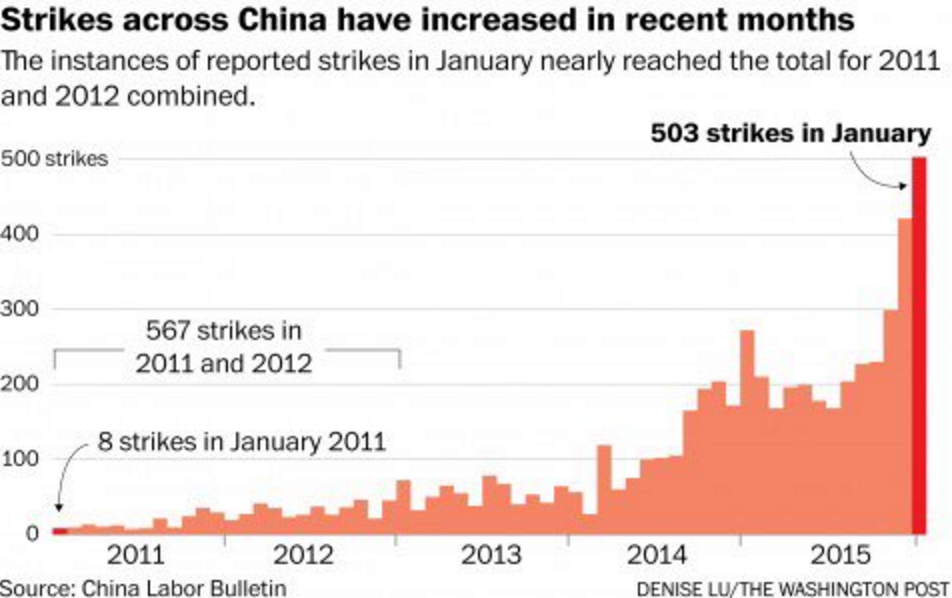 Xi also put new laws into effect essentially criminalising the work of foreign NGOs (non-governmental organizations) who they deem an “interference” with stability. The slow tides of time are at work in China, as well as the rest of Asia. It will be interesting to see what flavor of nationalism and conflict lady fortune brings this time.

I don’t know whether China will be successful in kicking the can down the road for any significant amount of time — there is literally no practical example in history to compare this too. I must say I’m skeptical though, and I get the sense that this is a move of desperation. Maybe the economic numbers are actually much worse.

If this is the case… then once this narrative takes hold… expect things to unravel quickly and violently.

The supply/demand dynamics still favor lower oil prices. This does not mean that oil won’t rise from here. It probably will… at least a bit. This temporary bullish price action is fully due to dollar weakness plus some help from China.

Cooperation amongst oil producing states has completely disintegrated. Even the once strong ties between the US and Saudi  Arabia have begun to unravel — Obama visited Saudi Arabia recently and was greeted at the airport by a low level minister, not the King (that’s a giant snub in international politics). Saudi Arabia is openly fighting Iran, Russia, and the US for global market share. Everybody is turning their taps completely wide open. It’s a race to the bottom and an endurance fight for survival. 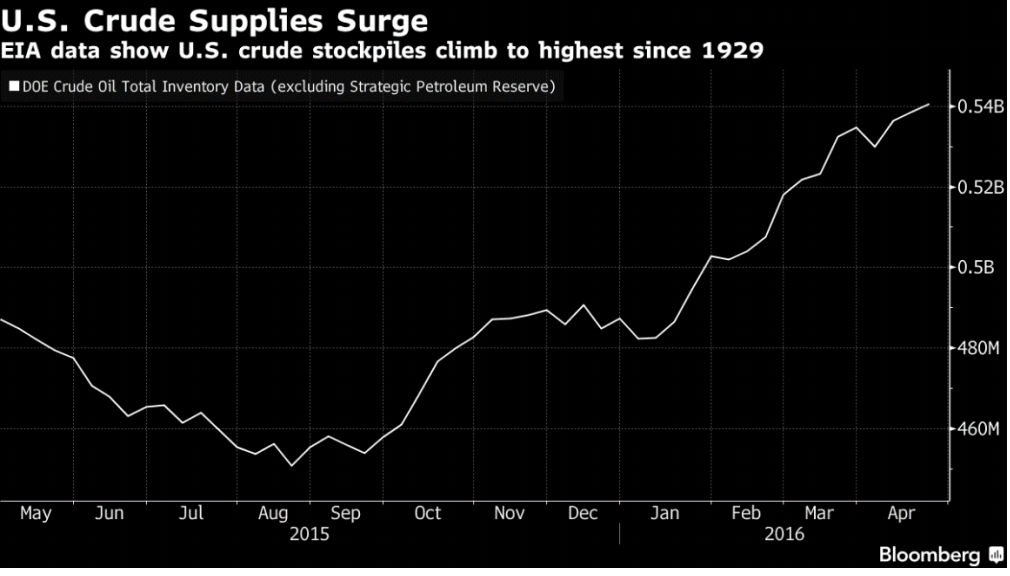 US crude stockpiles are at levels not seen since 1929 (an interesting coincidence). China has maxed out its strategic storage and has been filling up floating storage (oil container ships) which are nearly maxed out as well. This is an extreme example of a supply glut at work.

It is this reality that makes us very cautious in our tactical trading of some of these energy and other commodity plays to the long side. The price action setups continue to look enticing but we must remain cognizant that this whole rally in commodities and EM can reverse… and reverse fast.

Which brings us to the dollar.

The dollar just squeaked out a breakdown from its year long consolidation against many of its pairings. We’ll have to see if this holds and follows through into the week. 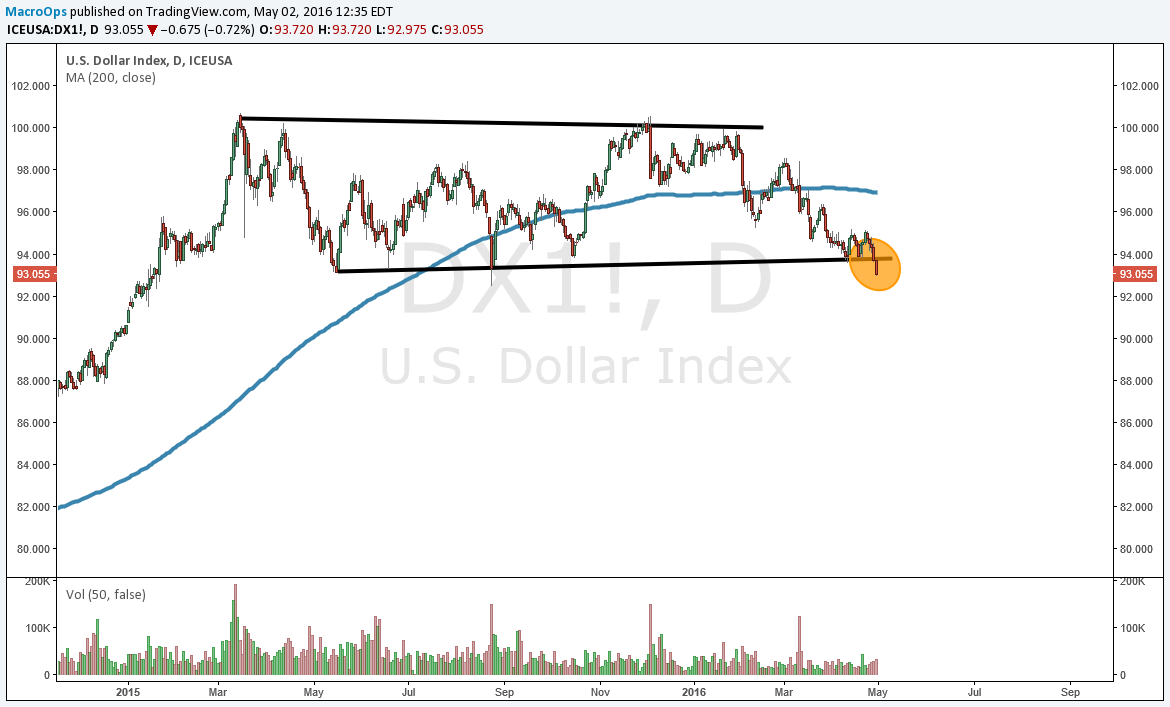 I think we may finally be seeing a large and dramatic selloff in the dollar over the coming month. This is something I’ve been expecting and looking for, for a couple months now. Currencies, for some reason, often have large and volatile retracements in the middle of big trends — right before turning around, getting back to the trend.

This may have something to do with positioning, sentiment, or perhaps policy makers have a tendency to act in the middle of larger trends. I don’t know. But it is something that happens quite frequently in forex.

So if that is indeed what we’re seeing, then the dollar could easily fall another 2-5% over the next month. This would set the dollar up perfectly for a resumption of trend sometime in June. This just so happens to be when the BOJ, Fed, and ECB are expected to introduce policy changes.

And here’s the interesting thing. The further and faster the dollar falls over the next month, the more incentive there will be for the BOJ and ECB to step in and do something dramatic. The Fed will also likely feel more secure that the dollar bull market is over and that it’s safe to raise.

This means that we have to keep a close eye on the dollar over the next two weeks. If it really starts to fall, then oil and commodities should spike up and those beaten down commodity plays we’ve been hopping in and out of over the last month could go parabolic.

Which brings us to the broader market. 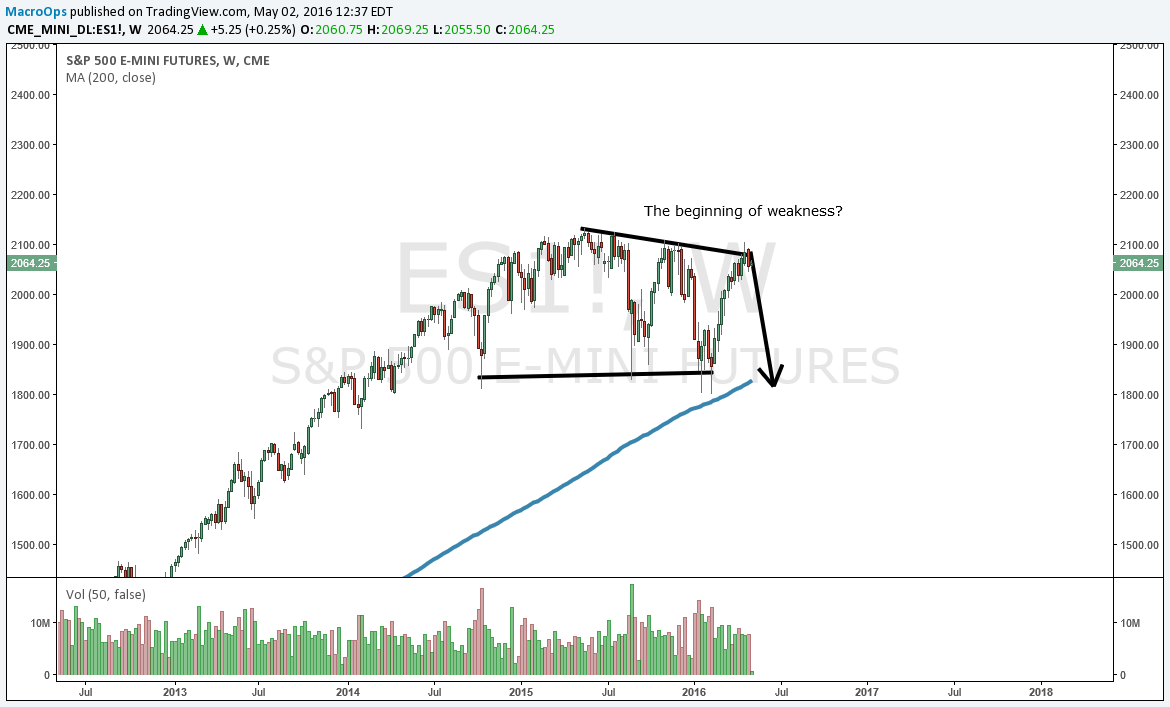 Equities sold off last week and this rally is looking tired. I think it will be turning over more aggressively soon, but I don’t want to short just yet. I would like to see a sell-off in high-yield and more declining breadth to convince me that the bear market is starting — this could very well happen by the end of the week. We’ll have to wait and see.

Earnings continue to roll over and the gap continues to widen between forward (expected) earnings versus the price of the broader market. This combined with the weak 0.5% in QoQ GDP growth — along with a suit of other data — still leads me to believe that we are in a turning business cycle and will likely be starting a recession over the next 12 months.

It’s a tough time to be trading the markets. Stay light and respect your stops. Good luck.

For more information about global macro and how to use it to trade markets, please click here.