The Market Is A Dash and A Marathon 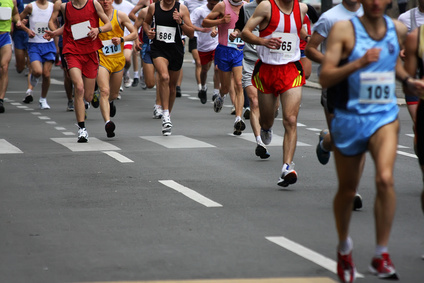 Yesterday, I watched an 800-meter race for our high school (our kid got third). One guy led the whole race until the last forty meters or so. In those last forty meters, the fella who did win came on steadily.  Slowly, and with churning power, he swallowed each millimeter between the leader and himself, until, finally, at the very end, he pushed his chest and head forward with a spurt of energy and won the race by that margin. As I reflected on that race right after, it occurred to me that what I just witnessed is what I witness in the market all the time – buyers and sellers racing to the finish line. Immediately, I then thought, “Dude, you need a break from what you do.”

Alas, there is no rest for the weary in the market race. Day in and day out it goes on, and, for me, it is a longer distance to run than 800 meters. Relatively speaking, I tend to see the market in a marathon frame for the most part; however, as is necessary, I couple that with the nearer term, which equates to a mile race.

In the mile today, we have running …

The second piece of news is good for the 100-yard dash only. Ironically, though, if the US Dollar continues to lose steam in the longer race, it helps the market win the long run, at least in my view of the race.

The above, however, helps in every race, except the 100-yard dash. Given the big-dog, current entrant in the short race is the Fed and raising interest rates, it is not likely that anything will end that run, save for the end of the run itself, which is coming soon.

Again, another piece of news that makes my marathon view more realistic. American consumers simply feeling more wealthy can lead to higher consumption, and when the bad weather ends in most of the country, oh boy, let the wealth factor take off.

In the meantime, it might seem as if I pick on certain elder folks in the financial world, but some of them deserve it. They get a prime spot to speak their wisdom and then they waste it on predicting the future some seven years out. If you recall, Bill Gross did that last fall. He announced to the world that the equity market had little future over the next seven years.

Well, he soon got canned from the investment firm he founded because of underperformance in the bond market and he went over to Janus Capital Group, where those folks welcomed the former Bond King with open arms …

What Assets Do Best in a Stagflation?