The Euro was blocked in the 1.2385 region against the US dollar on Thursday and retreated during the day as underlying sentiment deteriorated and there was underlying pressure for a correction weaker.

The fact that the ECB will not be able to take action for at least another month given the need to wait for the German Constitutional Court ruling in September had a negative impact with some doubts whether a cohesive plan can be put together. There were rumours that the German Finance Minister was returning early from his holiday, to orchestrate opposition to the bond-buying plan as the general mood of uncertainty persisted.

There were also reports that there would be delays to the next Greek loan tranche with Germany reportedly blocking any further support. Former ECB member Issing also stated that Germany could not be blackmailed into bond buying.

In contrast, there was some speculation over an additional ECB LTRO which temporarily boosted the Euro. The low level of liquidity during the holiday period contributed to the choppy trading conditions with market rumours tending to have a bigger impact given low liquidity.

US jobless claims fell to 361,000 in the latest week from 367,000 previously and the trade deficit also declined to US$42.9bn for June which was the lowest reading for 18 months as oil imports declined. The lower than expected deficit should also lead to an upward revision to second-quarter GDP estimates which will provide some limited dollar support.

The dollar gained some support from a rise in yields and the Euro retreated to lows below 1.2270 before correcting higher and the Euro was unable to regain momentum in Asian trading on Friday. 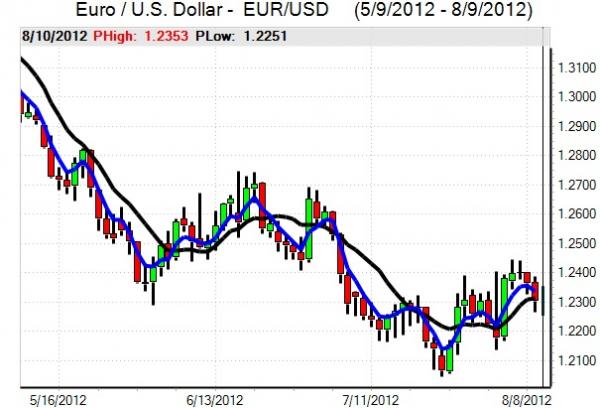 The dollar found some support in the 78.30 region against the yen on Thursday and rallied to a peak near 78.80 during the US session.

The dollar gained support from a rise in US Treasury yields following the latest US labour-market data. There was also some expectations that the Federal Reserve may be less willing to back additional quantitative easing in the short term which provided support.

The Chinese trade data was weaker than expected which renewed unease surrounding regional growth and also provided some underlying support. The Finance Ministry and Bank of Japan policies will remain an important focus, especially given expectations that the Chinese central bank will boost monetary policy further.

Sterling hit resistance in the 1.5685 area against the US dollar on Thursday and retreated steadily during the day although selling pressure was contained as Sterling was able to secure further gains against the Euro with a move to the 0.7860 area.

The latest UK trade data recorded a headline deficit of GBP10.1bn for June, the widest deficit for 15 years as exports came under pressure. Although the data may have been distorted by holidays, underlying confidence in the UK economy continued to deteriorate following Wednesday’s inflation report with fears that the economy would be unable to generate any fresh momentum.

There were also renewed doubts whether the UK would be able to attract defensive capital inflows as investors were les convinced that the UK economy could provide safe-haven support given the domestic fundamentals. There were reports that institutional flows had turned Sterling negative.

The dollar found support just below the 0.97 level against the franc on Thursday and pushed to a high around 0.9790 during the New York session. There was no significant move in the Euro as it held close to 1.2010 following the brief surge seen on Monday.

If doubts over ECB action continue to increase, there will be the potential for even stronger capital flows into the Swiss franc which will maintain an important focus on National Bank policies with further speculation that the Euro minimum level could come under severe threat. 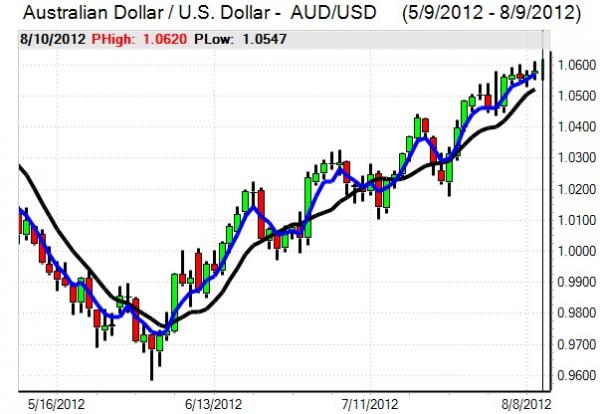 The Australian dollar was unable to make a fresh challenge on resistance levels near 1.06 against the US dollar on Thursday and dipped to test support in the 1.0560 area. Initial selling pressure was generally contained as there was still underlying expectations of reserve diversification into the Australian currency.

There was some caution over the growth outlook in the latest central bank monetary report while the weaker than expected Chinese trade data triggered fresh doubts surrounding the regional economy and outlook for commodity prices. In this environment, there was a retreat in the Australian dollar to below 1.0520.