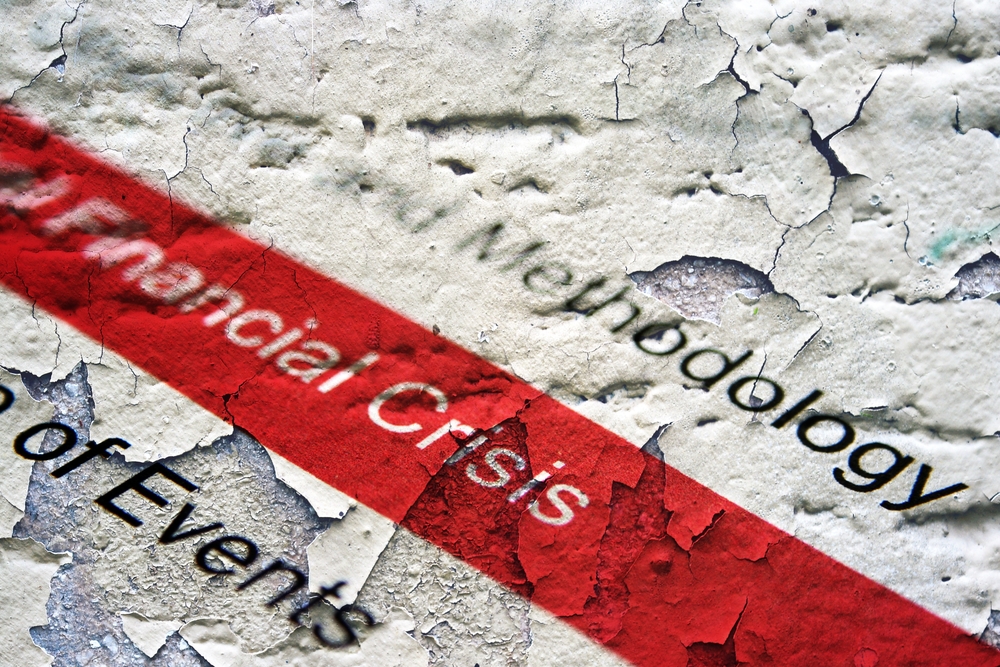 October is shaping up to be a huge month. On Oct. 17th a new SEC rule finally comes into play that will affect not only money market funds, but liquidity across the financial system.

Most investors don’t know this is coming. And that’s because SEC rules tend to get complicated, and their knock on effects get even muddier. We’ll do our best to simplify exactly what’s happening and what it means for the markets.

The story starts with money market funds — the open-ended mutual funds that invest in short-term debt such as US Treasury bills and commercial paper. These funds have always been a popular alternative to bank deposits because they were considered just as safe, while also providing a higher yield.

But the key to their “safety” was the funds’ promise to keep their net asset value (NAV) fixed to $1-a-share. This guaranteed that you would at least get back as much as you put into the fund. And it was widely believed that this $1 level would always hold. Whenever the value of the fund went above $1-a-share, you would be paid out in dividends.

This all changed in the 08’ financial crisis.

The entire financial system, from fiat currencies to debt, is based on confidence. And when this confidence falters, you start having serious problems.

Before 08’, the markets had confidence in Lehman Brothers and considered them a “safe” asset. That obviously didn’t last…

Lehman collapsed. And in the process, it set off a chain reaction.

You can imagine what happened to money market funds’ $1 NAV promise once Lehman failed.

The Reserve Primary Fund, the oldest US money market fund, “broke the buck”. Its NAV fell to 97 cents and all hell broke loose.

Now Lehman was only a small portion of the Reserve Fund’s assets, but it didn’t matter. Confidence was lost when the $1 NAV level didn’t hold up. Investors stampeded out of the Reserve Fund, causing it to collapse. This in turn triggered a run on other money funds, threatening the liquidity of the whole financial system.

As we explained before, money market funds invest in many short-term debt securities like commercial paper. Banks and big corporations rely on those loans from the funds to pay their day-to-day bills. Without that funding, operations seize up and you have a chain reaction that creates a liquidity crisis. This is exactly what was happening, which is why the government had to step in with bailouts to make sure the whole system didn’t collapse.

Now the key here is liquidity. Liquidity is the lifeblood of the financial sphere, and without it, the system chokes up.

Here’s where our October SEC rule comes into play. They decided, “damn, we don’t want this happening again”,and set some new standards that are finally coming online on October 17th.

These new rules basically say that prime and municipal money market funds (the funds invested in riskier assets than T-bills) will have to float their NAV’s. They would also be required to impose liquidity fees and redemption gates when times get rough like in 08’.

Now the point of these rules is to make the entire market safer. If the NAV isn’t pegged to $1 and is allowed to float below that level, it should give investors a better idea of the risk they’re involved with. And the extra redemption rules should prevent runs on money market funds that kill liquidity.

These rules may sound all well and good, but they usually cause unintended consequences. Whenever you put new regulations into play, market participants are forced to adjust in one way or another. These adjustments and their effects become difficult to predict.

And this is what we’re now seeing. Investors are making a massive shift in the money markets. They’re moving from riskier prime funds that will be forced to abide by these new rules, to safer government funds which are exempt.

The reason they’re moving is because of their risk aversion. Investors are used to their money market funds being 100% safe and returning their money. But if you introduce a floating NAV, then there is a realistic chance of actually losing on these short-term investments. That’s why you’re seeing the shift to T-bill funds that can still hold that $1 NAV promise.

So far $500 billion has moved from prime to government funds. Total assets in prime funds have now dropped below $1 trillion for the first time in 17 years. Many prime funds are also closing because of these new rules and investors’ responses. According to Sagar Patel of Morningstar, the number of prime funds has dropped from around 500 before the law, to 460 today. He believes more will continue to shut-down as we get closer to the actually implementation time. He even expects another $500 billion to move out of prime funds in the next few months.

This is clearly a massive shift that is completely changing the money market landscape. Now there are a couple of things that may happen as a result.

First, we may get more easing on the interest rate side of things. As we know, US Treasuries are considered some of the safest assets in the world. And because of the global deleveraging we’re going through, we’ve seen a relentless bid causing a massive run up in their prices. Interest rates are also being pushed lower and lower as a result.

The hundreds of billions of dollars flooding into the T-bill market will only exacerbate this trend. Especially when the $1.51 trillion t-bill market is already short on supply. As of now, the Treasury’s plan is to add about $188 billion in additional bill supply during the next two quarters to help cope with the increased demand. But there’s no guarantee that will be enough. The quick influx of funds could be enough to disrupt the T-bill markets’ structure. That would result in some wonky action in short term interest rates. But no one is really sure what will happen.

The prime markets are where a lot of large corporations and banks get their day-to-day financing from commercial paper. This is considered unsecured funding (meaning there’s no underlying asset backing it up) and is based on the credibility of the borrowing firm. This is a prefered route to access short-term capital for many institutions because it’s quick and avoids SEC involvement, which usually becomes expensive.

But now with the new rule change and all this money flowing out of the prime money market funds, this source of funding is drying up. More corporations will be forced to find other ways to support their daily expenses like payroll. But unfortunately, these other options are more expensive, and will likely lead to a slowdown in business activity and possibly unmet obligations. This could only be a negative for equity markets as corporate costs go up to account for the change.

And even worse off are foreign banks that depend on prime unsecured financing to meet their dollar obligations. A lot of these banks don’t have US customers depositing cash with them. This means they don’t have a ready supply of dollars available like US banks. In order to get the dollars they need, they access commercial paper through prime funds.

US dollars are the key to the liquidity of banks around the world because USD is a global reserve currency. It’s used in all types of transactions, even when neither party is based in the US. This makes access to dollars extremely important. But now with these new prime fund requirements, these banks are facing dollar liquidity problems.

We’re seeing the first of these problems developing in Japan’s banks. Reports have shown that out of the collective balance sheet of Japanese banks with branches in New York, almost 2/3rds of their funds raised on the liability side come straight from unsecured funding.

Now the lack of this unsecured funding is forcing banks to try and find alternative dollar sources. And their actions are causing distortions in the broader market.

Recently we referred to the above chart as the most important in the world.

To summarize, what you’re seeing is a huge discrepancy between interest rates implicit in the FOREX swap rate and the market interest rates (LIBOR). Normally these two are supposed to be consistent with each other. But right now they aren’t. A large reason why they’re different is because of the structural changes in the money market we just described.

So what does this mean?

First, there looks to be little appetite to lend dollars in the swap market. Swaps can sometimes be very illiquid, which means they can be high risk. No one wants to lend because they don’t want to chance not getting those dollars back. They’re anticipating and protecting for liquidity issues. And what’s funny is that by doing that, they’re in turn creating the liquidity issues they fear.

Second, the LIBOR rate is continuing to increase, signaling tougher standards of lending between banks

This again shows the lack of options once banks lose their funding from prime markets.

We all know how supply and demand works. So we know what happens when more institutions need dollars, as less institutions are able to supply them. The squeeze that’s coming from this reality has a good chance of causing a massive USD runup.

You should also remember that the world is also already collectively short $8-11 trillion US dollars from the USD carry trade. That’s another reason no one wants to lend anymore dollars. But if the USD appreciates from the prime money market squeeze, it could cause the carry trade unwind too, forcing the dollar even higher and exacerbating supply problems.

Banks struggling to obtain dollars will cause massive liquidity problems in the system. Central banks understand this and are already working to try and ease the issue. The Bank of Japan for example has been expanding its swap lines and adding new facilities to help their banks access dollar funding.

The big question though is whether this will be enough. Or, will this new money market rule be the spark that ignites the USD carry trade unwind, freezing liquidity in the system, creating a situation worse than 08’.

Most investors have put USD carry trade theme behind them in recent months, which tends to happen when you get price action in the dollar like we’ve been seeing since 2015… 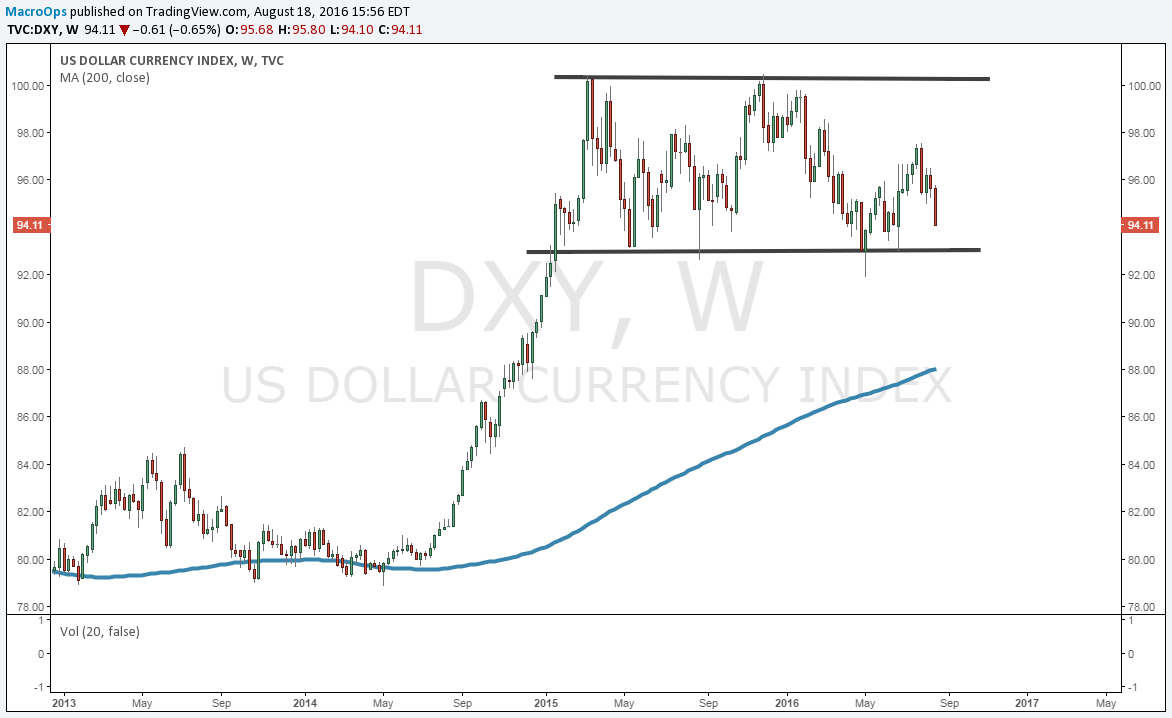 But the USD carry trade situation is still alive. And it will happen. The question is when. We’re keeping our eye on the dollar for a signal.

October looks like as good a time as any for the trend to kick-off with this NAV rule coming into play. Hopefully now you won’t be surprised when it happens…

For more information about how to avoid liquidity crises, please click here.